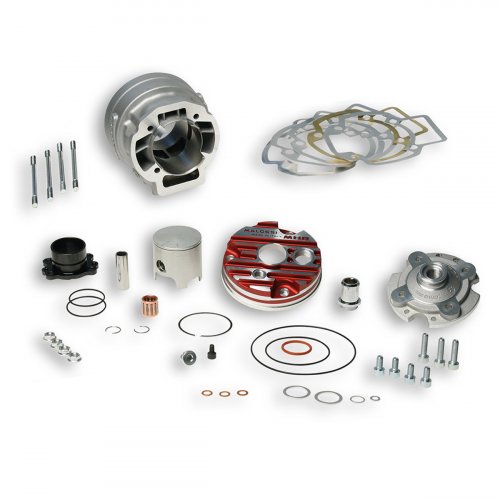 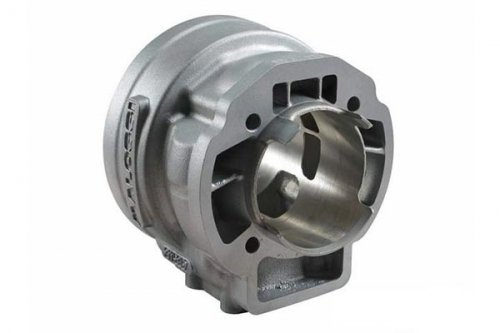 For those looking for race performance, with absolutely no compromise – The MHR Testa Rossa 94.

This cylinder kit is the highest power cylinder kit Malossi has ever made, capable of a whopping 31 HP! To achieve this, Malossi has gone completely back to the drawing board and used their decades of research and development of racing cylinders to design and perfect an entirely new range of cylinders.

Originally designed by Malossi as part of the RC-One package (Malossi’s complete bolt in engine) the Testa Rossa has been adapted for use in the factory crank case on both the Piaggio and Minarelli engine (the two base engines the RC-One was designed around). While it uses the factory crank case, the stroke has been increased by 4mm to help achieve the whopping 94cc displacement (almost double factory).

This cylinder kit packs so many features, its difficult to list them all without writing a book about it.. Two piece modular head with FORGED aluminium top cover, single ring piston, Nikasil bore, special 4 bolt exhaust flange mount with included quick release to suit MHR Team 3 exhaust, constructed from the absolute best quality high silicon aluminium for optimum strength and heat dissipation, and tolerances so finely and accurately machined that this cylinder kit designed to run at a squish of 0.48mm🤯

Being that this is a full race cylinder, please note that it needs to be likewise paired with matching racing parts. As a minimum, this cylinder kit must be installed with the matching MHR RHQ 90mm conrod crankshaft with a 44mm stroke, and MHR Team 3 exhaust (or similar exhaust which has been modified to suit the Malossi flange). We would also the installation of a 24-28mm carb, VL13 reed valve, Malossi E13 (or similar) pod filter, Malossi TC Unit (Ideally with an MHR Inner Rotor ignition).

If you’ve never built a full race setup before, we would HIGHLY recommend you contact us, so we can put together an appropriate setup for you. Correctly matched parts are absolutely essential!

Deriving directly from seven port technology, which animates the revolutionary Flanged Mount, BIG BORE Testa Rossa cylinders represent the latest success achieved thanks to the efforts and studies that Malossi has continued to devote to engines intended for original Piaggio and Yamaha cases and, with their unprecedented capacity of 70 and 94 cc, they allow the BIG BORE family to make a significant leap forward.

Externally almost indistinguishable from their flanged counterparts, BIG BORE Testa Rossa cylinders feature a stud bolt framework compatible both with original engines and with the C-One Malossi case. Even inside they are totally similar to Flanged Mounts, thanks to the renowned confi guration with seven ports and dual exhaust port, with the only difference given by the limits set by the inner passage of the bolts that affects the size and development of the exhaust. The head is once again modular, with new internal profi les specifi cally designed to increase the torque and feeling of the engine, now much brighter and even more progressive. The head cover is made of forged aluminium, red anodized and lathed in high precision CNC machines.